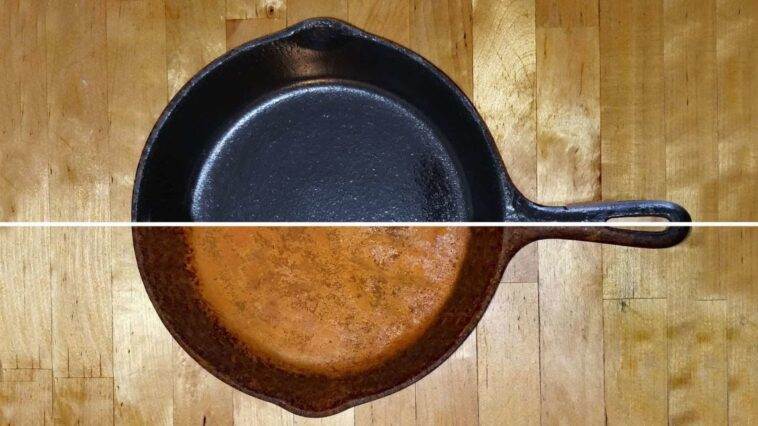 I am pretty sure that anyone who cooks with a cast iron pan is in love with it!! Every home cook has a possessive, proud, protective sentiment towards it. Why not!! It is a virtually indestructible, chemical-free, non-stick cooking surface, and yes, the cast iron cookware enhances the taste.

Furthermore, cast iron cooking administers a natural Iron supplement to food. If you ever tried cast iron for frying chicken or making chocolate chip cookies, there is no going back. The excellent heat retention of cast iron makes it possible to cook evenly, giving that perfect crisp you a looking for in each bite.

The only con in using cast iron is the constant maintenance, apart from being on the heavy side. How to clean a cast iron pan is what keeps the amateurs away from cast-iron cookware. No!! cleaning a cast iron is not finicky; think of it as a different set of steps than a regular pan cleaning.

The initial seasoning of cast iron cookware is considered crucial for a perfectly smooth finish and a non-stick surface. One should ensure durable seasoning, and it pays to dish out some serious elbow grease. Home cooks cannot accidentally leave the cast iron cookware unused and uncleaned. Maintenance is necessary after every use; you just cant rinse and drain as you do with regular Teflon pans. Cast iron needs constant care and love.

How to Clean a Cast Iron Pan—Basic to Advanced

How to clean a cast iron pan Light method

How to clean a cast iron pan Medium method

How to clean a cast iron pan Heavy method

A rusted, burnt, or cast-iron pan coated with polymerized oil residue remains will require heavy cleaning. You will have to re-season your cast iron from scratch after this.

Despite being simple, be extremely cautious while doing electrolysis at home; it’s better to do it outdoors to prevent inhalation of poisonous fumes.

Also, stick to the measurements and do not try to substitute anything. Any substitution might lead to a large current generation or an unwanted chemical reaction. If you find a vintage cast iron gem and you feel it’s worthy, try electrolysis. You will need,

Firstly clean the grime and oil from the cast iron pan. Pour 4 Gallons of water and one tablespoon of washing soda into a plastic container and mix well.

This is your electrolyte. Tie metal wire on your scrap metal and cast iron pan. Place them in your container; they should not touch each other. The scrap metal will act as Anode and the cast iron pan as Cathode.

Do not be tempted to dip your finger when the power supply is On. Always turn off the power source first, unclip, let it rest for an hour, and then feel free to touch the electrolyte or take a closer look at your pan.

Yes, the gas is flammable; thereby, the method is advised to be done outdoors. Leave the setup for a couple of hours or overnight.

Turn off the power supply, remove clips, fish out the cast iron, scrub it with a wire brush, and remove rust remnants. If required, pop in your cast iron pan for a redo; the electrolysis solution can be reused.

Oil has a major role in cleaning and seasoning a cast iron pan. A fatty or denser oil is preferable for use on cast iron cookware. The pans tend to heat up to a very high temperature and have superior heat retention; hence oils with low smoking points are avoided.

Butter, Extra virgin olive oil is a big no-no as they tend to burn quickly and form a sticky coating. Any refined Vegetable oil can be used as per taste preference.

It is better to choose an oil with a high smoking point; as the cast iron heats up, the oil will melt into the pores in the pan and polymerize, and hence each seasoning will give a very thin and light coating of polymerized oil.

This acts as a non-stick surface. Oil with a low smoking point will not polymerize; they form a sticky layer, making cooking on a cast iron difficult.

Neutral tasting oils are grapeseed, corn oil, and canola oil, and these work well for seasoning the pan.

Coconut, Peanut, avocado, flaxseed oil, Sesame oil, and Soybean oil are pretty good too, but the flavor might not be compatible with some cuisine.

Flaxseed oil has gained popular belief recently, it has a low smoking point, and oil polymerizes readily at a lower heat. However, a few faced flaking of the pan after using it. Go for premium brand flaxseed oil to avoid any mishap.

Bacon fat is a beloved cast iron seasoning oil for many. A list of oils and their smoking point is available here.

Cast iron cookware is available in many forms, from pans, skillets, grills, woks, casseroles, kettles, Aebleskiver pans, and the list goes on.

There are two types of cast iron cookware—regular and enameled cast iron. Regular cast iron pans need to be seasoned from time to time.

However, some people find that the cast iron pans give out a metallic taste while cooking acidic food like lime, sour cream, and tomatoes. Enameled cast iron pans can solve the problem.

The Enameled Dutch oven does not need seasoning; the enamel coating acts as a protective surface. Some new cast iron Dutch ovens will have a layer of wax to protect them from rusting.

Pop the cookware upside down in the bottom rack of the oven bake at 350F to 400F for an hour. The wax would melt off due to high heat. To catch the dripping wax, don’t forget to place an aluminum foil spread underneath.

To remove the stain in enameled cast iron skillet, fill the pan with water, pop it in the bottom rack of the oven at medium temperature let it soak. Add bleach or cleanser for stubborn stains.

How to Clean a Cast Iron Pan—Handy Tips

Buy cast iron cookware from a well-known brand, and there are duplicates in the market that are a mix of metals. These duplicates have a high corrosion rate, and the food cooked in them would not give the same taste as that of cast iron.

Too much oil will cause oil residue to stick and form an uneven black coating. Try to use oil moderately.

Use it every single day. The more you use a cast iron pan, the better it turns out. Cast iron becomes seasoned after the cooking session.

The flavor of food cooked in a cast-iron skillet tends to stick on and linger for a while. Separate pans for cooking smelly food like garlic, meat, fish, and baking will save you from a disaster. Imagine a chocolate chips cookie that has a garlic kick to it!!

Remove cooked food and store leftovers in a different container. Cast iron skillet cannot be popped into the fridge, as the iron will start to oxidize.

Refrain from cooking eggs in a cast-iron skillet for a few months; they tend to stick more than any other food. Delicate fish falls apart quickly in a cast iron pan as well.

You can remove the fishy or garlic smell by sprinkling salt on a cast iron skillet leaving it overnight. Or bake the cast iron pan at high heat in an oven and clean it with paper towels.

Avoid using steel wool after the seasoning; treat the cast iron pan like non-stick cookware whose coating would come off if cleaned roughly.

Remove stuck-on bits of food; if left on, they burn when you cook next, resulting in a black flaky residue.

Remember, well-seasoned cast iron is effortless to clean. Season a new pan 3 to 6 times for the glossy smooth finish.

Once you get wind of how to clean a cast iron pan, the maintenance is easy peasy.

Lastly, if you make a mistake with your cast iron cookware, do not fret; deep clean it, season, and re-season. If you are stuck, follow the steps mentioned herein “How to clean a cast iron pan”. The pan is like a phoenix; it rises from the ashes. 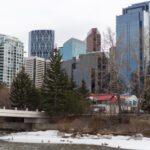 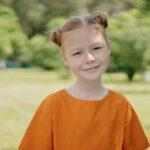